Sophie's many solo CD's have received international acclaim, including a Deutscher Schallplatten Preis and nomination for a Gramophone award. Her latest release, of music by Armand-Louis Couperin, was described as 'exuding invigorating virtuosity'. Below are a handful of reviews:

'The Transciptions of Concertos by Vivaldi' , Chandos Chaconne CHAN0796

'The Transciptions of Concertos by Vivaldi' , Chandos Chaconne CHAN0796

Bach's fascination with the music of Vivaldi is generously displayed in the concertos he transcribed for keyboard.
» Read complete review
» Browse online catalogue

Having thus begun with my concluding paragraph it’s best to amplify each of those three strands. The eight transcriptions are those of concertos by Alessandro and Benedetto Marcello (one each; BWV974 and BWV981 respectively) leaving the bulk the work of Vivaldi. Bach wrote them around 1713 and 1714 when he was living in Weimar, and his adaptation of the string writing for the solo harpsichord, to which Yates draws attention to in her booklet note, is one of the most compelling things in these faithful but personalised transcriptions. Bach included Alessandro Marcello’s famed Oboe Concerto, and it too is fashioned with remarkable logic into Bach’s patterns of writing, never sounding for a moment out of place.

Next, for Yates’s playing, which is decisive and sensitive. She responds as much to the music’s inherent grandiloquence as to its measured lyric repose in slow movements. Further, as a listen of BWV972 vividly shows, she marries grandeur and calibrated precision to notable effect. The treble ring in this concerto’s slow movement evokes a range of colours and timbres and the cascading virtuosity of her finale, brilliantly rhythmic and untouched by any excesses of articulation and rubato is a pleasure to hear - and exciting too, as it was surely designed to be. She finds vivid wit in the opening of BWV973, and just the right finesse and tempo in the opening Andante of BWV974, Marcello’s Oboe Concerto in its new guise. Alessandro Marcello and his older compatriot, Vivaldi, favoured spare accompanying chords in slow movements and these are rendered with a ‘clunky’ assurance - nothing at all clunky about this playing, assuredly.

Yates ensures that differentiation of voicings is uppermost in the opening of BWV 976; those repeated phrases with their echo effects are unselfconsciously evoked here, too. The rolled chord staccati of theLargo of BWV 978 - note here the subtle finger weight to produce terracing of dynamics - are especially fine. Her sense of the music’s characterisation in BWV980 - both theatrical but also touching something like desolation is admirable in every way.

Finally, a word about Garlick’s double manual 1996 harpsichord, which is a copy of a Jean-Claude Goujon instrument, made in Paris in 1748. It sounds really marvellous and lacks for nothing in subtlety. Fine booklet notes (by Yates) and demonstration-class recording quality bring me back to my opening paragraph in resounding fashion. 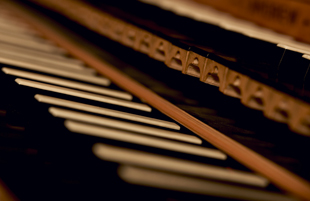